Every dog lover has had to give 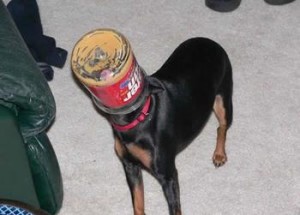 medications to their dog. Sometimes the meds are flavored and appealing and sometimes they aren’t. Many dog owner and vets alike have hidden pills in peanut butter. Peanut butter is excellent camouflage to hide bitterness and is very popular among dogs.
Recently, certain food manufacturers have started to add xylitol to peanut butter to try to make it a lower calorie choice for those people watching calorie intake. Xylitol is a sugar substitute found mostly in candies, desserts and gums, but also in some vitamin supplements (for humans) and medications. Other writers have mentioned that brands using xylitol are Nuts ’N More® and Krush Nutrition, but I only found a brand called P28 at my local health food store.

Because of the way dogs metabolize it, xylitol can cause a life-threatening drop in blood sugar (glucose) and liver damage in some dogs. There is no part of this goodie that you should share. Affected dogs will stagger and even collapse. If you think that your dog may have eaten any xylitol, it is critical to see your vet or animal ER.

But otherwise, don’t panic. I have perused the shelves of many stores and have only found xylitol containing nut butters in stores specifically selling vitamins and health foods so far. Mainstream peanut butters are not typically included in this warning. But before you give any nut butter product to your dog, you should read the label completely. If you see XYLITOL on the list, do NOT give it.

The logic behind production of the line of special butters for humans is reducing the high calorie and fat content naturally found in nuts. This concern is also pertinent to dogs and even regular xylitol-free peanut butters should be for occasional treats or pill disguise only. Obesity is a national epidemic in companion pets and shortens dogs’ lives. Other complications associated with fat ingestion can include pancreatitis and cholangiohepatitis (disorders of gall bladder and liver), so think before you offer anything that is high in fat. *For more on translating crazy long medical words, see 5 Medical Terms Every Dog Owner Should Know.

The xylitol issue is very critical. Many people would not think to look twice at peanut butter. It has been a staple of everyone’s childhood and our culture for as long as I can remember. Because the xylitol containing versions are seemingly available mostly from health food stores, we would all think that we were giving our dogs something healthy and great. The trouble is…they may be great for you, just not for your dog.

Make a habit of reading ingredient lists. If you see a word you do not recognize, rip off that label or take a photo of it to ask your vet. If we do not know, we will find out. Let’s spread this word and save some lives!